The Day of Arafah is believed to be one of the most important dates in the Islamic Calendar. Muslim pilgrims performing Hajj from all around the world stand united on the plain of Arafah, offering prayers to ALLAH on this day.

Being the ninth day of Dhul- Hajj, the 12thmonth of the Islamic calendar, the significant value this day holds and the immense benefits that can be obtained for all Muslims can never be thoroughly expressed in words. For this reason, all Muslims should spend this day in fasting and remembrance of ALLAH.

Let’s take a closer look at why fasting on this sacred day should be practiced and what benefits Muslims can attain by doing so.

The merits/ virtues of the Day of Arafat

In order to get a comprehensive understanding of the significance of this day, it is important to realize the merits that this day possesses.

In the Quranic verse of Surah Al- Maa’idah, the following verse is present.

“This day I have perfected your religion for you, completed My favor upon you and have chosen for you Islam as your religion.”

It is believed to have been narrated by Umar bin Al- Khattaab that this verse was revealed to the Holy Prophet PBUH when he was standing on the plain of Arafah.

It is a known fact that the greatness of ALLAH can never be denied and when the Almighty swears by an oath, it must be massive in importance. The following Ayat in Surah Al- Burooj shows us that it was Yawn Arafah that is considered the witnessed day.

The reward of keeping a fast on the Day of Arafah has a mighty benefit for those who heed. When the Holy Prophet PBUH was asked regarding fasting on this day, the following was narrated by Muslim.

“Fasting expiates the sins of the previous year and the coming year.”

It has been narrated by Ibn Abbas that the significance of this day can be seen by the fact that it was in Arafah that ALLAH took the covenant from the loins of Adam. From all his loins, his offspring were gathered and ALLAH addressed them. It is narrated by Ahmed that there was no greater day that this and no covenant more massive than this.

It is the day of forgiveness of sins, freedom from fire and pride in those who are present

The great benefit of fasting on this day can be judged through the sayings of the Prophet.

The Holy Prophet PBUH is narrated by Hazrat Aisha as stating:

“No other day is present on which ALLAH frees more people from the fire than on the Day of Arafah.”

It is also narrated by Ibn Umar that the Holy Prophet stated:

“ALLAH expresses his pride in Angels at Isha time on the Day of Arafah.”

How Muslims who aren’t performing Hajj can attain the benefits of Arafah Day?

The religion of Islam does not put undue stress or burden on any of its followers. For this reason, those performing Hajj do not need to fast due to the hardships incurred on the pilgrimage. However, the following ways are ideal for gaining the benefits of Arafah Day:

Offer supplication to their Lord for the forgiveness of sins encountered in past and guidance for the future. (Astagfaar should be recited)

Behave with utmost respect and dignity

Establish brotherhood and unity amongst other pilgrims present at Arafah

Give charity of any kind or form

Day of Arafat according to Hadith

The importance of Day of Arafat can be determined from sayings of the Holy Prophet PBUH, also known as Hadith.

Whenever asked about fasting on this day, the Holy Prophet states: “It expiates the sins from the previous year as well as the upcoming year.” This is the greatest benefit to mankind.

It is immensely important to offer supplication and Zikhr for all those who are Day of Arafat Fasting 2017. The Prophet states: “No other day is present on which ALLAH frees people from the Hellfire than on the Day of Arafat.”

The Day of Arafat is undoubtedly one of the greatest gifts of ALLAH. All Muslims from around the world should fast with vigor on this day so that ALLAH can grant them forgiveness of sins and elevate their degree in the

Paradise above. All about from the Day of Arafat. Anticipating for the sacred journey of Hajj? Check out our exclusive Hajj cost from USA for a swift trip with luxury services. 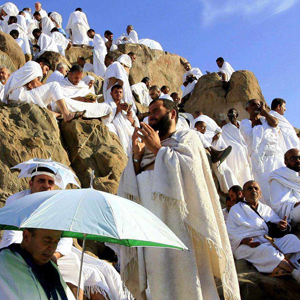