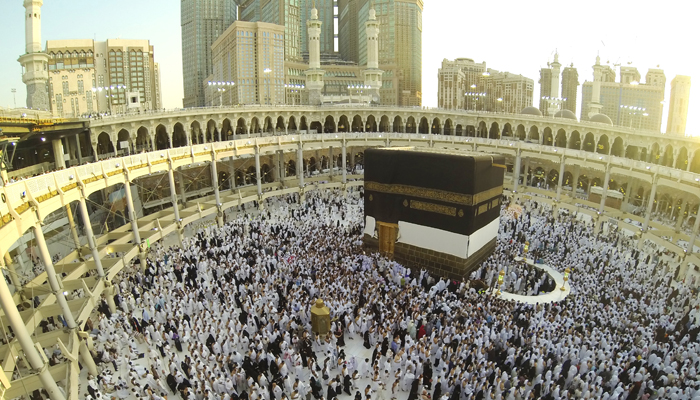 In the center of the holy city of Mecca, there is situated the building which is most sacred to the Muslim Ummah. It is the Holy Kaaba. The Holy Mosque (Masjid al-Haram) was built around it in 7th century AD.

History of Kaaba and the Sacred Mosque

Kaaba is the first-ever place ordained for the worship of Allah by mankind. It was designated as the sacred House of Allah by Almighty Himself.  As Allah says in the Holy Quran:

“Indeed, the first House [of worship] established for mankind was that at Makkah – blessed and guidance for the worlds.”

It’s very first foundation was laid by Prophet Adam pbuh. Prophet Ibrahim was then ordered by Almighty to rebuild the Allah’s House on the same foundations. Allah says in Quran 22:26;

And when We designated for Abraham the site of the House, [saying], “Do not associate anything with Me and purify My House for those who perform Tawaf and those who stand [in prayer] and those who bow and prostate.

The house of Kaaba has also been mentioned as a sacred place of worship by the Jewish and Christian Holy Scriptures.

Prophet Ibrahim PBUH, along with his son Prophet Ismail PBUH, erected the house of Allah on the foundations laid by Prophet Adam and prayed to Almighty that this House stays the center of worship for mankind till the end of times. Within Prophet Ibrahim’s PBUH lifetime this House of Allah was filled with Idols by the disbelievers until the last and final Messenger of Allah, Prophet Muhammad ﷺ came and demolished them after conquering Mecca.  The Holy Kaaba was then made the Qiblah for the Muslim’s salaah.

Masjid Al Haraam is ‘The Sacred Mosque’ that was built around the Kaaba. During the caliphate of Omer RA, the houses around the Holy House were destroyed to expand the area for the increasing number of pilgrims, and the mosque hence built has been modified repeatedly to date. It is now the largest mosque in the world.

The sacredness of The Kaaba and Masjid al haraam

Kaaba is the House of Allah, The Magnificent, The All Noble. Subhan Allah! He is free from any imperfection. So is His house. And the Masjid al haraam as the name suggests is holy and sacred. Haraam literally refers to prohibition, which implies that certain acts like fighting, the killing of animals etc are prohibited in this sanctuary. Allah Almighty exalts the sacredness of His house in Quran:

And [mention] when We made the House a place of return for the people and [a place of] security. And take, [O believers], from the standing place of Abraham a place of prayer. And We charged Abraham and Ishmael, [saying], “Purify My House for those who perform Tawaf and those who are staying [there] for worship and those who bow and prostrate [in prayer].”

The Centre of Worship for Muslims

The Holy House of Allah and the Masjid Al-Haram without any doubt hold the position of extreme significance in the worship practices of the faith of Islam.

Salah is the most important means of communication in Islam, between a worshipper and Allah. It is the second pillar of Islam. This is how a Muslim connects with his Creator and separates himself from the distractions of this world and materialistic desires. It is the Qiblah or the direction towards which Muslims are ordered to face while they offer their Salaah.

We have certainly seen the turning of your face, [O Muhammad], toward heaven, and We will surely turn you to a qiblah with which you will be pleased. So turn your face toward al-Masjid al-Haram. And wherever you [believers] are, turn your faces toward it [in prayer]. Indeed, those who have been given the Scripture well know that it is the truth from their Lord. And Allah is not unaware of what they do.

And from wherever you go out [for prayer], turn your face toward al-Masjid al-Haram. And wherever you [believers] may be, turn your faces toward it in order that the people will not have any argument against you, except for those of them who commit wrong; so fear them not but fear Me. And [it is] so I may complete My favor upon you and that you may be guided.

Hajj is also one of the five pillars of Islam. It is a pilgrimage made to the Sacred House of Allah. It is obligatory upon every Muslim who has the means to perform this duty.

“It is on people for the sake of Allah to “how to perform hajj” of his house, anyone who is able to undertake the journey to him.” (2:196)

It was first started by Prophet Ibrahim PBUH, who after building the Kaaba was ordered by Allah Almighty to circumambulate around it. After that Prophet, Ibrahim would come every year to make a pilgrimage to the House of Allah. Hajj packages were made compulsory at the time of Prophet Muhammad PBUH and since then every year, Muslims from all around the world gather at this sacred place and perform the practices of worship and devotion. And the importance of pilgrimage to this sacred place can be known by the Hadith of our beloved Prophet Muhammad which says:

“A person who performs Hajj purifies himself from sins like the day that he was born.”

Besides commemorating the practice of Ibrahim PBUH, Hajj also gives a lesson of Muslim unity and brotherhood, because in the House of Allah no one is superior to another. All are equal in the sight of Allah. So Muslims standing shoulder to shoulder forget their differences and prostrate before one Allah in His Holy House.

A Full Day in the Haram Masjid, Makkah, Saudi Arabia

Why is Ramadan Celebrated?